It’s been a while and quite a lot has changed since then. I moved to a different company, which means I won’t be playing around with Mule for now. On the other hand, I have several new things to play with.
My current company lacked of proper versioning capability of their products. Hence, my first task was to help with that matter. The plan was to be able to utilize Jenkins for modules releases (via Maven) with keeping all powers of a Git Flow branching convention. What’s more, I extended existing functionality of building Debian packages and used Nexus as a native .deb repository.

As of the technical background: We use Git as our version control system, Maven as a build tool and Jenkins as an integration platform. So far, we mainly had one master branch where most of the development took place. Feature branches were spawned occasionally. All artifacts were using the same 1.0.0 version, which obviously introduced a lot of hassle and pain. We wanted to put an end to that and start doing things like they should be done.

We were attracted to the Git Flow branching model. Some of us already used it, to some extent, in front-end development. Hence, it felt natural to adopt it on the back-end side as well. The aim was to make use of this branching model as pleasant as possible to us and leave coping with modules versioning to Jenkins.

I started to play around with Jenkins and Git and what I didn’t like about their cooperation in the first place (one job per Git repository) was lack of clear feedback. I couldn’t tell which exact branch has just been built. What’s more, It looked as it would stop me from fully utilizing Git Flow potential in terms of releasing and versioning. Hence, first step emerged:

How can we achieve that? Of course, we can manually create and drop Jenkins jobs per each feature, hotfix and release branches. Any volunteers…? I thought so :) Not without a reason it is said that the programmer biggest virtue is laziness. I had to find a way to automate that. When I googled, I was surprised. I couldn’t find an easy solution for that (or didn’t google enough). Even if found, it, very often, introduced a lot of dirty scripting and workarounds. The tool, which seemed to be most elegant and closest to our needs, is Jenkins Build Per Branch by Entagen. It is a Groovy script, which you invoke from a Jenkins job as a Gradle task. However, it looks to be more useful in a different type of branching convention (GitHub Flow).

As I really liked the idea behind I decided to work on Git Flow variation of the script: Jenkins Build Per Git Flow Branch. Pretty much everything (genesis, installation, usage) is described at the GitHub project page, so it’s better to check it out, before further reading.

Ok, so Jenkins provides really nice Git Flow job management now. We need to figure out how to utilize that for Maven artifacts releasing.

Back in the days, when working with SVN, there was a Maven Release Plugin (and M2 Release Jenkins plugin) to accomplish the releasing part. It wasn’t great, but when configured properly, it did the job pretty well. I started to dig in how to make releasing work with Git Flow. It appears that it is still possible using Maven Release Plugin, but it can be tedious and troublesome work. It seems that much better solution exists. It is a plugin created by Jonatan Doklovic – Maven JGit Flow Plugin. He has already done a good job explaining it in his blog post and describing the advantages over old approach.

It looks like we have all the necessary ingredients, so let’s start cooking.

Two things are required in our pom.xml build file. Firstly, we need to set up the artifact repository as usual:

Note: Snapshot repository address won’t be used in our example, we decided to store only final releases.

Secondly, we need to configure the JGitFlow Plugin:

We want to make the plugin doing the pushes for us and we need to make sure that we follow the ‘-’ suffix (i.e. release-) branch naming convention (as explained in the Jenkins tool readme). EnableSshAgent value is set for connectivity purposes.

As stated previously, ground point is that Jenkins handles modules building and releasing. One benefit is a guarantee of same compilator version among the builds. What’s more, some of our developers are working on Windows OS, hence they are not able to build .deb packages out of the box (and we use them to distribute our services). Again, Jenkins to the rescue!

I think that most sensible way of explaining the concept is going throught the whole flow step by step. And I will try to accomplish that:

So, let’s assume that master and development jobs are already set up (we will cover them in a while) and I want to start working on a new feature. After I make sure that my project has clear Git status (nothing left to be commited etc.), I can execute JGitFlow Maven goal:
mvn jgitflow:feature-start

Shortly, after providing the feature branch name in the Maven interactive console, two things will happen: created feature branch will be pushed to the remote repository by JGitFlow plugin and during Jenkins Git Flow per Branch (I’ll abbreviate it to JGFPB) sync job execution, it will create an actual job based on the feature job template. How the template should look like? In our case it’s the simplest scenario you can imagine. We only want to execute maven clean install. Let’s look at the example: 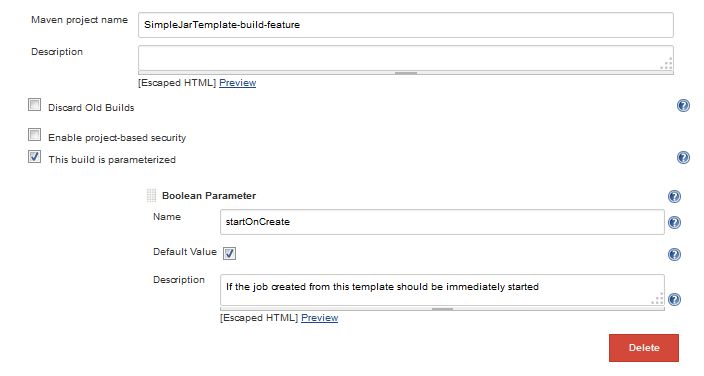 Currently, we are using two sets of templates: one for ordinary jars and the other for debian packages. As you can see, I’m goint to focus on the first one. The latter is a topic for a next blog post. Remaining part of this screenshot is the fact, that I added the startOnCreate parameter as I want to build the project as soon as it shows up. That will probably be the case in most situations. 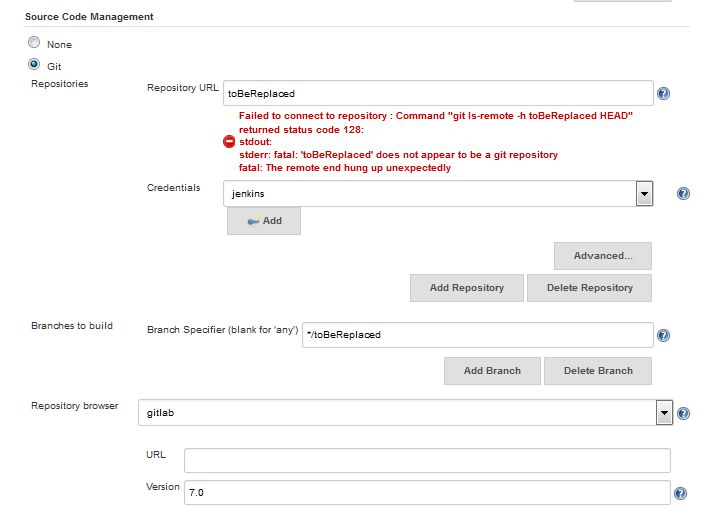 Nothing fancy here as well. At this point, ‚Repository URL‚ value is irrelevant. It will be substituted for the Git URL by the Jenkins Sync Job. The same applies to ‘Branches to build’. And yes, we are using GitLab :)

If you’d like to perform Sonar builds out of your feature jobs, you just need to add Sonar post-build-step and provide any value in ‚branch’ field. JGFPB tool will do it’s job and replace the branch accordingly (as it does with Git URL and branch to build)

Are you ready to deliver your feature? Just finish it by JGitFlow: *mvn jgitflow:feature-finish and pick the feature you want to finish in the Maven interactive console. That’s it. The plugin will merge it into development, delete the branch and the Sync Job will remove the Jenkins feature job when executed. As you see, working with features is pretty simple.

Now it’s time for the key player – the development job. One of the two ‚fixed’ jobs (along with master). As Git Flow branching model suggest it should always contain production-ready like codebase. Hence, it should be responsible for initiating the release process. To do that we can incorporate Release Jenkins plugin. It will enable us to start a customizable job with different execution than the usual build. Here are most important bits of development job configuration: 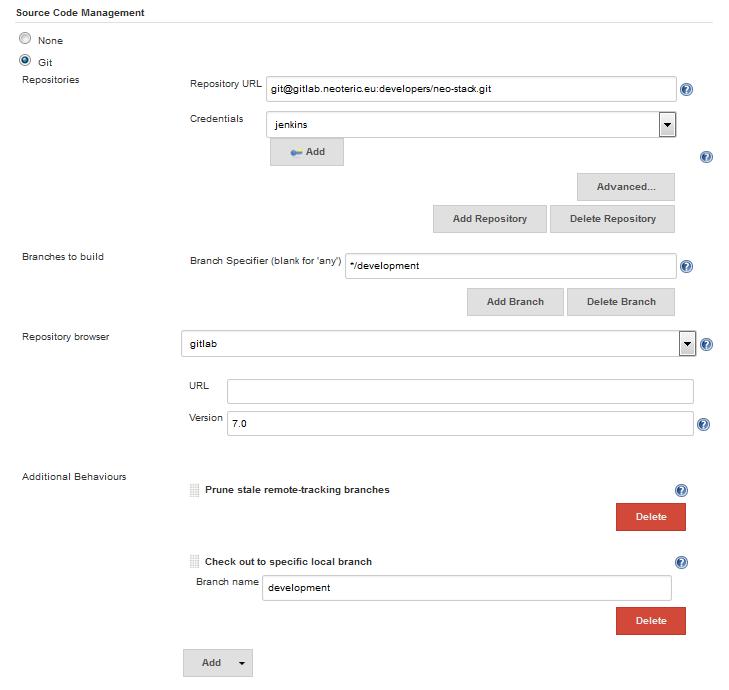 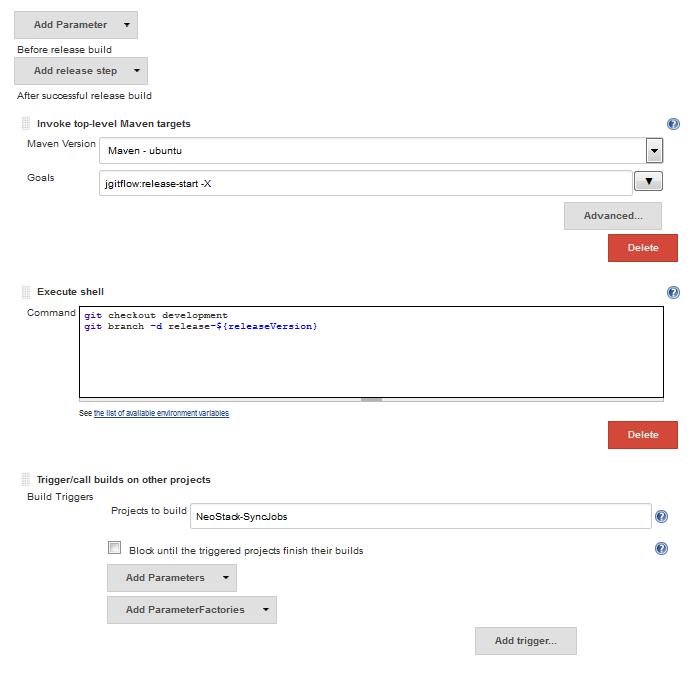 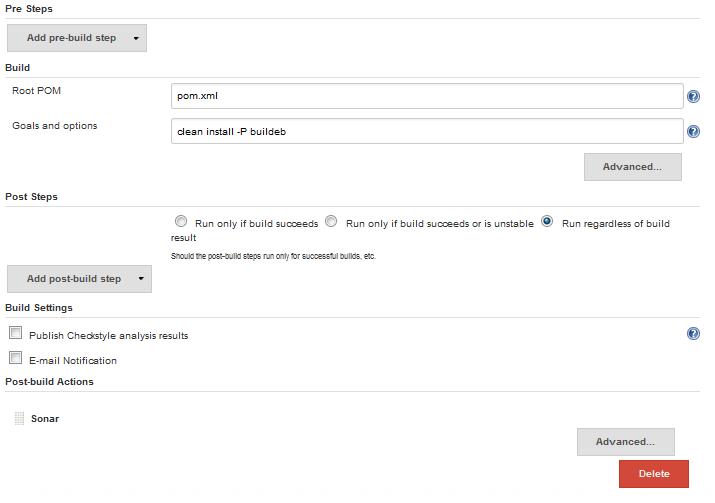 Few words of explanation before we dive into release job configuration:

Git-Flow recommends using release branching for so called ‚release hardening’, where you can fix all bugs found in UAT and prepare release metadata. We found it to be an excessive effort (at least for now) and decided to skip the release phase, in a way, that it starts and immediately finish the release branch. This way we still stay flexible, if we’d like to extend the release cycle. 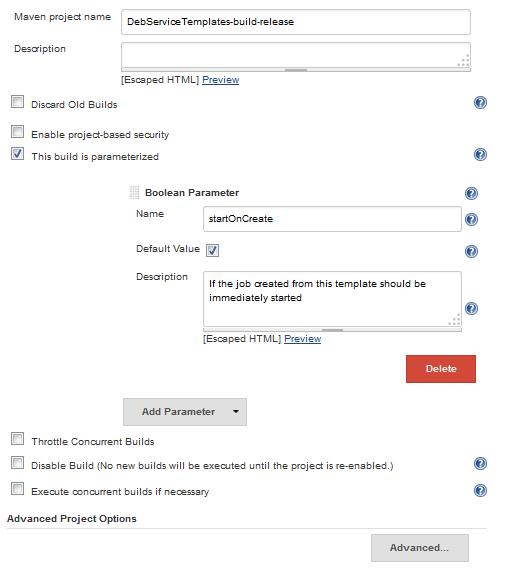 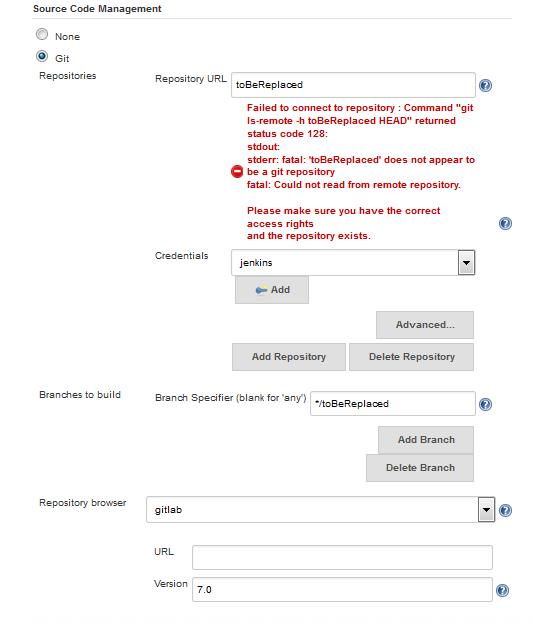 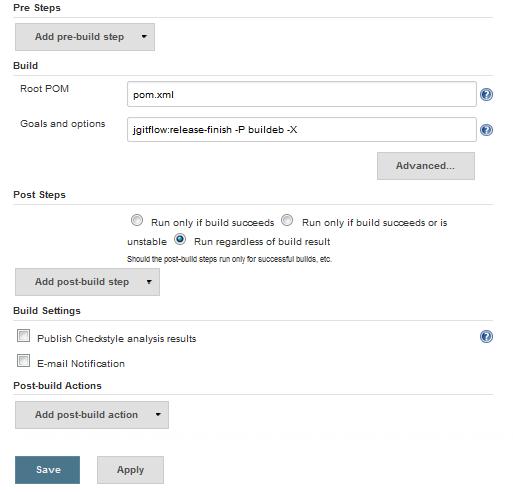 When build is completed, we should have:

That covers almost every aspect of the releasing cycle. Last outstanding part are hotfixes. To perform such, we should run jgitflow:hotfix-start Maven goal. It will create and push new hotfix branch (after specifying it’s version in the interactive console). For most of the cases you just should increment PATCH version. Hotfix branch will be build against its template: 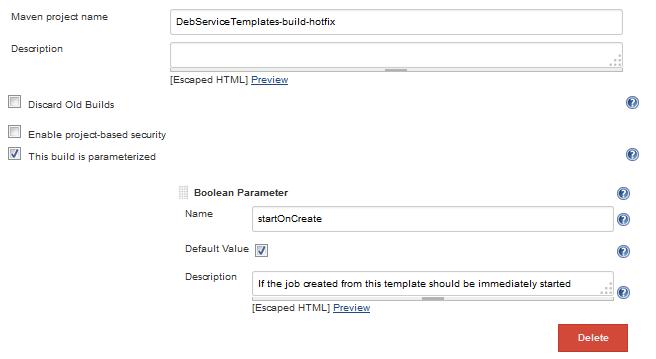 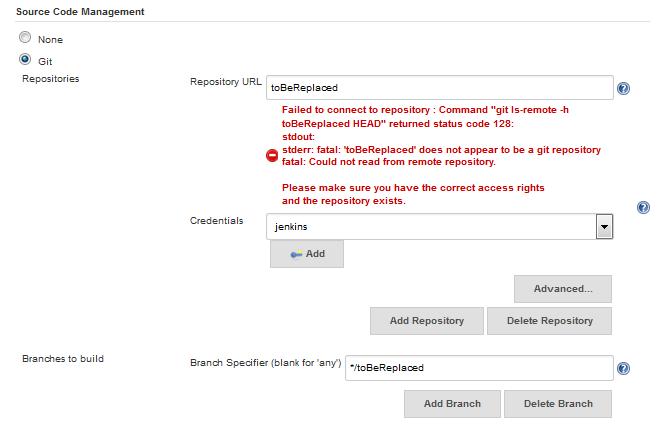 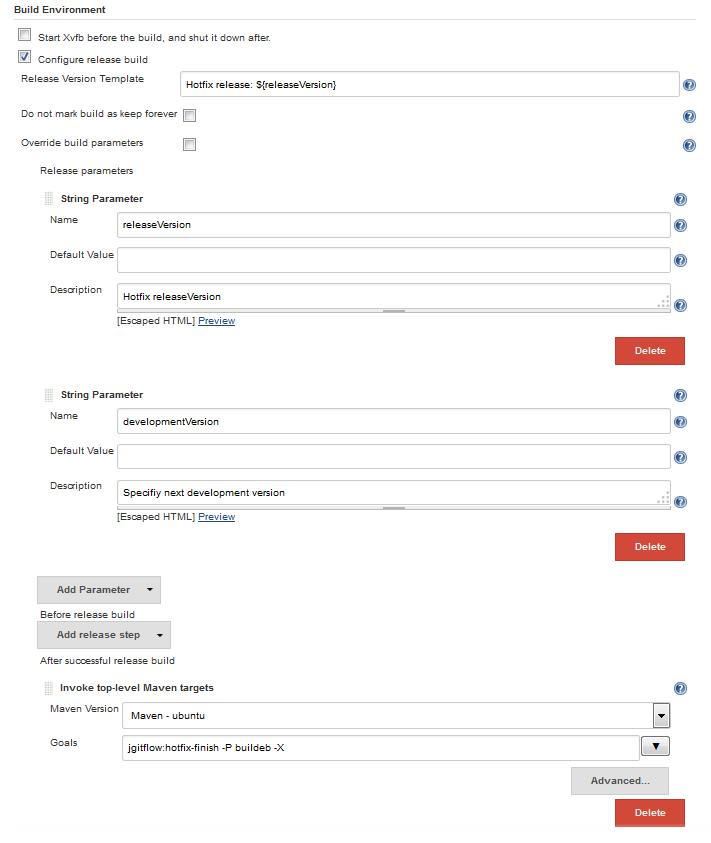 There is nothing here you haven’t seen already. Most notable difference is the fact, that hotfix template has releasing capability enabled (but still, it’s exactly the same as you saw in development branch config). Maven goal for releasing hotfix branch is jgitflow:hotfix-finish. Usage of hotfix branch is easy. When you’re done pushing your fixes, you execute release build, specifying release and development versions. When hotfix is done, artefact should have been deployed to Nexus, branch and job should have been removed, and all hotfix changes merged to development and master branches. Reminder: do not forget to delete the hotfix branch locally and to git fetch prune, as the hotfix remote branch is no longer available.

That concludes all parts of making Jenkins speak Git Flow. The solution is not without flaws, but works for us quite well. We have a clear vision of a project status and progress without the burden of managing Jenkins jobs manually. Few things to consider would be: make Jenkins automatically pick version numbers from pom.xml itself and how to avoid unnecessary waiting for sync job to create project jobs.